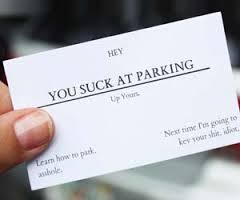 I never understood the statements, “faith can move mountains” or “have a little faith” until this day. Passing by my parked car on my bicycle, I began to curse and yell, all strictly within my head, lest I be taken off the biking trail for insane behavior. I had just biked 16 miles and when I saw my car partially blocked in, I decided an extra 4 miles would appease my irrational thought behavior. Instead, anger sped me on and all I could think about how many tow trucks I would need. When I finally returned, sweaty and in a snit, I assessed the situation as I dismounted from my bike. Two cars had parked behind me with just enough room for me curse and scream and hopefully back out unscathed. However, my stats for backing out of tough situations required help. God, I spoke in silent prayer, if you’re around….To my surprise God showed up in the form of a taciturn parking officer.

Asking the officer in the most polite manner I could muster, “Think I can get my car out?” The officer looked over the situation and bluntly said yes. I think God was in a bad mood. “Would you guide me out?” He sighed, looked around at the sea of cars all in impossible parking spots, and nodded yes. Earlier, I had managed to turn car around so I didn’t have to back out but rather I could drive out with a little bit of luck without getting new paint color. The cop waved me on as I put the pedal to the metal at a whopping 1 mph. Meanwhile, I panicked all I could see was my left side, if I was so inclined, I could key the car without ever leaving my seat. (What can I say I have my evil side and my keys were occupied at the moment.) The cop kept telling me to swing left and my instinct was to veer right. Finally, he sighed stopped me and said, “Look you have plenty of room on your left but nothing on the right, you need to veer left!” And in that instant, I understood faith. God, the cop, saw a 360 degree world that I could not see. All I saw was the problems on my left and not the world on my right, but He could see it all. I learned faith squeezed between cars.
He guided me out safely and without scraping the paint off the other cars, much to my chagrin.  He barked some orders about moving quickly as I put my bike on the rack and when I turned around to thank him. He had disappeared.

Lesson Learned, I know faith and I know where to park from now on.