Claus on Cognac and other Remarkable Gifts I have Received 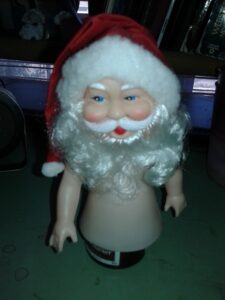 I thought Stephan was the creepiest thing I have ever seen. He had wide blue eyes with straight eyelashes that stared straight to the core of soul. My friend has an Elf an on Shelf and I when I saw the thing through pictures, I was kind of mortified. I couldn’t believe the kids would actually want him around, she said her kids loved him. The premise is that Stephan, (his adopted name) brought out of the basement at the beginning of December, watches over the house and reports to Santa. She, the mother, would move the elf every night for the illusion that the elf did indeed have a convo with Santa Claus of everything that went on in the house. I call that eavesdropping and invasion of privacy, they call it Stephan.

This began an adventure of sorts. I started to make comments on Facebook about this elf and the revulsion I felt toward this plastic, little creepy toy. My other friends than began an insurgency of sending me all kinds of pictures of Elf on Shelf, such as sending him down the disposal, an elf tied up and burning alive, and well I let you use your imagination on the rest. I love it! Because naturally, I was the center of attention and good humor, my friend, the owner of the wicked elf, sent me a private picture of Stephan with a note that said Stephan was coming after me personally. I did the LOL! Made some remarks but inside I was looking for Stephan because I had no doubt in my mind that he could fly over several states and come after me.

After Christmas, Stephan went back to Santa to wait out the year. She closed the box, my hope is buried him in the basement under bricks and mortar, and Christmas was done. After a couple of weeks, a , different friend brought me Claus on Cognac, a small plastic Santa Claus head on a travel bottle of cognac, a reminder of my Stephan adventure. Christmas never ends, we may put away the twinkling lights, the festive decorations but the gifts of heart remain. In this Easter season of reflection and Lent, I thought about all the gifts I have received from all my friends.

From my friends fighting MS and Lupus: They taught me how to live. I spent my time feeling sorry for people under the misguided belief that if I felt bad for them it would make them feel better. It doesn’t. I can fall with them and we can both lay on the floor and feel badly or I can get up and ask if they need a hand or ear. If they could, they would live life to the fullest and they ask me to do the same.

To Writing friends: I’m home. I spent a long time being frightened of the dark thoughts I had. In my book, My Soul to Keep, there are some dark passages and I felt alone thinking I was crazy. My friends and I share a kindred friendship and we can figure out 15 ways to kill someone (in a book) over a weekend.

To my Artist friends: the gift of vision: I see the world in colors and what seems like black and white usually have reflective colors of the world all around.

My Amputee friend: the gift of wholeness. He is the one I look to for courage and we laugh together at the insanity of life.

From my mother: Compassion. She had mental illness and it was rough growing up at times but from her I learned compassion for others.

From my sisters: The gift of laughter and love and to stand up for myself.

From the Whole-Hearted Women: I gather with incredible women to learn from them and through a shared passion of art and crafts, I gather my heart and make it whole.

From my therapist: New insight and new way of thinking that has brought immense joy, a career, and love and acceptance.

From the diabetic: I learned the gift of sweetness, not in food but by his mere presence in my life has brought harmony.

These are gifts that I get to open all year along, receive with love, and in turn give to others. I look forward to the coming year and to see what that creepy, little elf will bring in the Christmas Season.